Launching a new version of ImageMagick

At Transloadit, we desire to give you the best possible encoding experience, and one of the big pillars in that is
making sure that we use the latest encoding tools.

It’s no secret that we’re heavily relying on open source technology for this, and so we make an effort
to give back to the giants whose shoulders we’re standing on by for instance providing free hardware to the ImageMagick
project.

Even though we have an intimate relationship with the project, it’s proven a very hard problem for us to modernize
our stack.

Our customers rely on behavior of the old version (even on its bugs, more on that later), so “just upgrading”, which we naively tried some many years back, breaks their workflow. To ensure we can provide a consistent experience even between operating system upgrades, that means compiling ImageMagick and all of its 31 dependencies. Yes 31, because by adding libraries such as pixman, pango and ufraw we gain support for 131 more formats than what a standard apt-get install imagemagick would provide on Ubuntu. And by including libraries all the way down to zlib, we also shield ourselves from any backwards compatibility breakage that could occur in the face of operating system upgrades, and allows our encoding capabilities to be a constant factor that our customers can build businesses on.

Besides vast support for formats and this guarantee on continuity, the advantage of compiling is that you can create a static binary. This is a single executable file that has every dependency baked into it. This way it becomes easy to run very different versions of the same software alongside one another without any conflicts, giving our customers an upgrade path that is opt-in. This is how we have been proving upgrades to our video encoding software.

The problem now however with upgrading our image stack, is that compiling ImageMagick and the 31 dependencies is that this process would take 2 hours, and that is on a beefy server. If one particular library version conflicted with another, you may only find out after 1.5 hours, you’d have to think of a possible fix and try all over. That’s hardly workable/maintainable, and certainly does not amount to the level of agility that we aspire to have in our development.

The introduction of Docker containers, we thought, would solve some of this struggle in that we could at least run versions alongside easier, and speed up our build times through the use of layers. Also, instead of having single massive binaries to recompile, we could just recompile 1 shared library if needed. Our initial joy was tempered when we learned that there was no way to start containers without dangerous system privileges. This meant we either had to keep containers running and let our non-privileged API user proxy commands to those, or be okay with giving this user the privilege to start containers. Proxying would be fragile however, and by giving privilege an attacker could theoretically mount any directory on the host machine as a --volume into the container, and then read/write/delete whatever they wanted with it. We learned about work done in the runC project to launch containers without root access (and we’ll likely take that approach in the future) but it wasn’t at the level of maturity that we needed yet.

We also considered running a separate cluster for the new version, but this would come with serious costs in additional hardware, maintenance and operational overhead.

We dove deep into all these different directions and each time had to back out as they had serious drawbacks. How should the future of our stack maintenance look like? What mature enough solution could give us continuity guarantees while maintaining our agility?

We’d been following Nix for a long time as a possible solution. We have been building our software with a simple compile framework that Felix wrote back in 2012 which implemented some of Nix’ basic ideas and qualities already. It’s been working very well for us all these years, but Nix takes these, and additional concepts much further.

Nix is a functional programming language that let’s you define how to build software in a declarative fashion. By making use of a global cache, you only have to compile things that are unique to your environment, but in many cases you can just pull the resulting software straight from this cache. This can greatly improve build times as there is no building *waves hand *

After a good amount of learning and experimentation we figured out how Nix and depmake could co-exist, so that we can already make use of the new, without throwing away the old.

This opens a floodgate to new software and is going to make it extremely easy for us to roll out new stack, customize it, ensure it keeps it working in the same way forever, and allow multiple versions of the same software alongside one another.

The gist of the work in providing new stack to our customers has now moved from building to testing it, which is a great improvement.

We’re still considering wrapping our Nix-built software in containers and running them root-less, but this would primarily be to deliver added security on top of the containment that we already provide.

Will we ever deprecate our old versions? Yes. But we’ll do so with grace-periods where we gently nudge people towards the new.

So now we present to you our new ImageMagick stack nicked v2.0.3 (not SemVer, any change is potentially BC breaking). It’s been in private beta for two weeks and is now entering public beta. It’s based on the latest ImageMagick version that Nix provides but with custom additions such as libraw so that our customers can enjoy those 131 extra formats.

Besides RAW and all the other formats that we already support, customers will love that the new stack comes with support for WEBP and DjVu formats.

We have updated our supported formats page so you can more easily discover differences between our stack versions, just click the “Compare” button. 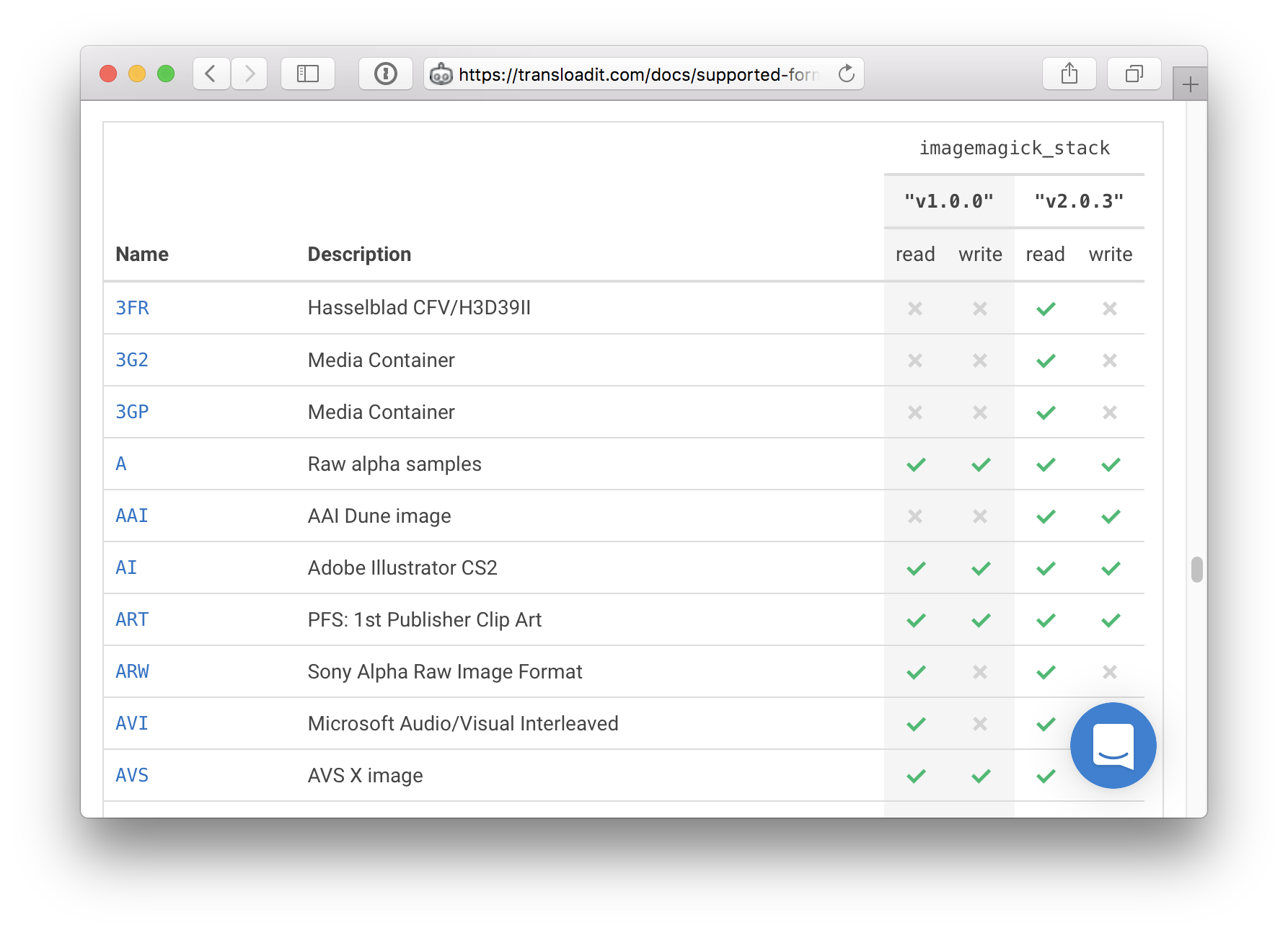 For your convenience, here are the full lists:

Aside from these customer facing upgrades, we’re quite happy to that the new version has operational benefits for us like the plugging of a number of security vulnerabilities, memory leaks, etc.

Our previous ImageMagick had a bug in colorspace handling resulting in darker images and incorrectly reporting sRGB vs RGB. This is now fixed, but if you had worked around this bug, you are relying on it and so will need to compensate when you choose to upgrade.

We no longer support reading PGX and JPX files, and for the formats: BRG, GBR, GRB, RBG it is now recommended to create an RGB format and then swap channels afterwards.

For reference, you can find a full changelog at the bottom of this post.

Transloadit recommends to start using the new ImageMagick stack for testing and non-critical workloads. You can do this by adding imagemagick_stack: "v2.0.3" in your /image/resize Robot Step.

Our apologies for taking so long to deliver on this upgrade, you can expect much timelier updates thanks to our new way of stack herding

We’d love to hear your findings so do let us know what you think via the well known speech bubble on our site!

For reference, here is the a full changelog: