Spam filters are something we rarely give a thought to, but nevertheless, they are quite important- working backstage and taking quite the load off. This was something many Gmail users realized after a glitch in Gmail’s spam filter let dangerous, malicious, not safe for work messages to be sent to their inbox.

The problem was picked up by Android Police when a remarkable number of individuals posted the spam issue on Twitter and Reddit. They complained about spam messages being sent to their inbox, even promotional and updates alert. 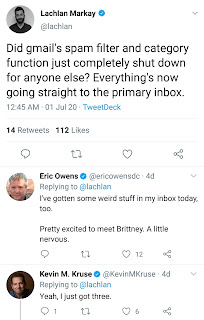 “It is a strangely comforting thing that I can just search for “Gmail” and immediately Twitter provides me with evidence that yes, others are getting weirdly hit with spam right now”, tweeted Rev. Emmy Kegler the same day.

“It is a strangely comforting thing that I can just search for “Gmail” and immediately Twitter provides me with evidence that yes, others are getting weirdly hit with spam right now” posted Abid Patel on the micro-blogging site.

Even Reddit was in-fluxed with threads discussing Gmail filter issue, “Is anyone else noticing that Gmail spam filters are broken as of an hour or two ago?”, posted a Reddit user. Though Google did acknowledge the problem saying a notable amount of users faced the problem but the issue is now fixed and accounted for but some of the users are still complaining of filter and category problems on social media. 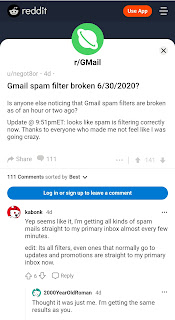 A major problem which spam mails could contain is malicious malware files and phishing emails which users thinking as primary mail could open and trigger and attach, though Google reassured in their statement that none of the accounts were compromised or hacked.

A spokesperson from Google released a statement that the glitch is now fixed and dealt with “We have identified and since fixed the issue of a small number of promotional emails and spam being incorrectly sent to users’ primary inboxes. During this time, scans to filter malware and the most egregious spam and harmful content remained fully operational. Additionally, Gmail users remained protected by the many other features such as link protections and download time security scans which apply for messages in the inbox.

We have no reason to believe any accounts were compromised as a result. If you happen to notice a suspicious email, we encourage you to report it as spam. More information on how to report spam can be found by visiting our Help Center.”

Why is it so hard to remember what I accomplished in 2016?