on Sunday, March 25, 2018
|
Since
everybody nowadays is more accustomed to do everything digitally rather than
manually the usage of applications and other technological shortcuts is very
common , but it is still a shocking revelation for any user to come to know
that his/her personal data is being transmitted to a third party without their
consent, but what’s more distressing here is the fact the  “app” that is held responsible to do so is the
Narendra Modi app, the personal mobile application of the Prime
Minister of India Narendra Modi.
French security researcher Elliot
Alderson has
claimed that the app. is allegedly sharing private information of users to a
third-party US company Clever Tap without their consent, Alderson shared a series of
tweets claiming that when users create profile on Narendra Modi Android app,
their device information, as well as personal data, is sent to a third-party
domain called in.wzrkt.com., which apparently belongs to the US company. 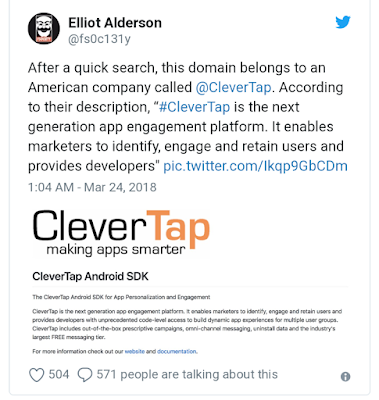 In order
to confirm whether this privacy breach occurred or not, Alt News decided to take a deep dive into this issue and
investigated PM Modi’s Android App. They used popular software called Charles,
to intercept the data between the phone and the outside world so as to ascertain
whether the user’s phone is transacting with a certain website or not.
The
software is capable of enabling one to view all the HTTP and SSL/HTTPS traffic
between a machine and the Internet.

Alt
News, to verify the
claim of the researcher, installed the Narendra Modi Android app and proceeded further
to create a profile. After successfully registering they got to know that the “app”
was transacting data over the Internet which they captured using the Charles
software mentioned above. There
they saw that personal information such as name, email id, gender, telecom
operator type and more was indeed being shared with the website in.wzrkt.com.

This is
a very consequential happening as security issues related to sharing of
personal information  are becoming more
and more generic and so to say, this is not the first time that Elliot Alderson
has claimed to such an occurrence.

Help for hacked sites: Assess the damage (hacked with spam)

Ministry of External Affairs thanks hacker for Inputs on Vulnerabilities