Bespoke Storage Technologies: The Alphabet Soup Found in Modern Hard Drives and Beyond

It seems like just yesterday (maybe for some of you it was) we were installing Windows 3.1 off floppy drives onto a 256 MB hard drive, but hard drives have since gotten a lot bigger and a lot more complicated, and there are a lot more options than spinning platters.

The explosion of storage options is the result of addressing a variety of niches of use. The typical torrenter downloads a file, which is written once but read many times. For some people a drive is used as a backup that’s stored elsewhere and left unpowered. For others it is a server frequently reading and writing data like logs or swap files. In all cases it’s physics that sets the limits of what storage media can do; if you choose wisely for your use case you’ll get the bet performance.

The jargon in this realm is daunting: superparamagnetic limit, LMR, PMR, CMR, SMR, HAMR, MAMR, EAMR, XAMR, and QLC to name the most common. Let’s take a look at how we got here, and how the past and present of persistent storage have expanded what the word hard drive actually means and what is found under the hood.

You could punch your data into rolls of paper tape, or press it onto optical discs, but for today’s article we’re talking about rewriteable media and for that, magnetic storage is still king.

For all magnetic technologies, an important concept is the superparamagnetic limit, which refers to how small a grain of material (a distinct collection of atoms) can be for each bit to store the data. If there are only a few atoms holding the magnetic state of a bit, then the reader has a difficult time sensing their value, and the writer has a hard time writing to the bit without impacting nearby bits. For this reason the write head is often larger than the read head, so that the stored and read value of the bit is correct and overcomes the magnetic slop at such small sizes. This is important for tape and hard drives, but not solid-state drives (SSDs).

Magnetic Tape is Still a Thing

Tape is still really well regarded by archivists and people with long-term storage needs, and is still an actively developed technology. With an areal density of up to 201 gb/in2 (sorry, the industry uses this unit) achieved in 2017 by Sony, and prices of tape dropping, it’s a great option for backups and rarely accessed data, and lasts decades when properly stored. Data access isn’t fast, but it’s reliable, and if you don’t have the hardware, you can outsource your tape storage and retrieval through online companies.

The storage has linear tracks, so that a set of heads can read/write data as the tape passes by. Track density can be so high that it exceeds the width of the heads, which led to linear serpentine tracks; really dense tracks but the heads can be shifted sideways a smidge to access the next track. The tracks go from the beginning of the tape to the end of the tape, and then back again (because why rewind the tape to start the next track?), so the tracks end up looking like a short and wide S.

The neat thing is that cartridges can be a little future-proof, as in some cases the tape is compatible with higher track density, so they’ll work with newer hardware, and even have more storage when formatted using that hardware. 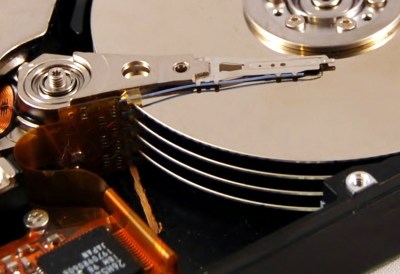 Hard Disk Drives (HDDs) are the spinning platters we have known for a long time (and covered recently in Maya Posch’s deep dive into the precision engineering of hard drives). Just like with CDs and even vinyl records, the data is stored in small bits on tracks in concentric circles, and a head moves along the radius to access the data.  Manufacturers have essentially hit the limit of density due to the superparamagnetic limit, but it wasn’t immediately obvious to consumers because they could just increase the number of platters in a drive of the same outer physical dimensions and therefore increase the size of the disk storage. Then they started replacing the air inside with helium, which reduced friction and allowed the disks to spin faster and add more platters. But the storage mechanism on the platters themselves has become fundamentally different. For the past few years some new technologies were being developed that are starting to make it into the market now.

Hard drives originally used Longitudinal Magnetic Recording (LMR), where the poles of the magnet grain were flat on the surface of the disk. This took up a lot of space, so they aligned the grains vertically in Perpendicular Magnetic Recording (PMR) drives. In both LMR and PMR the disk has a series of concentric tracks, and there is no overlap between the tracks; the smaller read area is nestled snugly within the larger write area. The lab coats then increased areal density with the invention of Shingled Magnetic Recording (SMR), but since it’s a variant of PMR, they had to rename the previous kind to Conventional Magnetic Recording (CMR).

SMR uses the wide write head, but overlaps the tracks slightly so that the read areas can be more densely packed. That’s why it’s called shingled. However, this comes at a cost. Much like how it is difficult to replace a single shingle in the middle of a roof without disturbing the shingle above it, it’s impossible to write a single bit in the middle without overwriting the nearby bits, so the drive needs a lot more logic with the data management. It typically accomplishes this by writing new stuff to empty parts of the disk, then later going back to the old area and reorganizing it for future use, making a whole section clear at once. This means an SMR drive isn’t great for specific tasks, like heavy use, because it needs to have time to reorganize tracks. It may have more bytes, which is great for people who want large storage with rare writes, but as a primary drive it will likely have performance problems. Despite this significant downside, manufacturers haven’t been up-front about which drives use the technology, and they’ve been caught putting the drives in NAS appliances.

Besides packing the tracks together closer, physicists are working on pushing the superparamagnetic limit with technologes like Heat Assisted Magnetic Recording (HAMR) and Microwave Assisted Magnetic Recording (MAMR), and Energy Assisted Magnetic Recording (EAMR). All three operate in essentially a similar way, but get there slightly differently. The idea is that you want the grain to be stable enough that it won’t flip on its own or due to temperature variations or influence from nearby bits, but you also want it to be strong enough to be easy to read, and easy to write (called coercivity). As the grains get smaller and smaller and more densely packed, this becomes more and more difficult. The XAMRs solve the problem by making the grains stronger despite their close packing, using a different material with higher resistance to change, and then boosting the power of the write to accomplish the more difficult energy requirements necessary to flip a bit. In the case of HAMR, it’s with a laser that briefly heats a grain up by a few hundred degrees, writes it, then lets it cool rapidly. MAMR uses microwaves instead of lasers for heat. And EAMR uses electric current to boost the energy on the write head.

Another area of improvement is in the motion of the head. The thinner the track, the more accurate the position of the head must be. This is being accomplished with piezoelectric flexing, so that the heads rotate slightly and can be more aligned with the track.

Doing Us a Solid (State)

Solid state drives are increasing in storage size as well, and without the opportunities for mechanical failure, their simplicity means increased speed and lifetime. Advances in density have come in two forms; levels and layers.

NAND flash is organized into cells, where each cell stores a voltage level which represents a bit. While it’s actually a transistor, you can think of each cell as a capacitor, very good at holding a charge for a long time. Originally data was stored with a single bit per cell, which was very fast and reliable. Then they realized that voltage levels in the cell can be considered analog, and with an analog to digital conversion they could store multiple bits in a single cell by changing the voltage level. We’re now at Quad Level Cell (QLC) technology, which means that a single cell can have 16 different voltage levels that are decoded to 4 bits. This increased the possible drive size significantly, but came at a huge cost as well.

The tiny changes in voltage means less reliability, especially as cells eventually wear out over time and are less capable of maintaining their voltage level, and the need to do ADC conversion slows things down. Compounding the problem, each cell is being written more frequently, too (because they hold more data), which means they degrade faster. Finally, NAND flash cells don’t last forever without power, and without regular refreshing the cell voltages can slowly drop, leading to bit rot. QLC is best suited as a low-cost drive that replaces HDDs in read-heavy applications, but may not be ideal as an unpowered backup or a write-heavy drive.

We typically think of chips as mostly flat things, but 3D NAND is another way that storage density has been increasing. All of the addressing mechanisms are the same, and the memory cell concept is the same, except a whole bunch of memory cells are stacked on top of each other, with some drives at 128 layers already. Now instead of a single address returning a single bit, that single address returns 128 bits as the entire stack is read out. 3D NAND can be accomplished either with single long strings, or multiple strings stacked on top of each other and separated by an insulating layer. The easiest way to picture this is to imagine a multi-story hotel, and each address refers not just to the room on the first floor, but to every room directly above it. In other words, X01 gives you 101, 201, 301, 401… up to the top of the building. Some drives are combining the two technologies, using levels and layers, to get even higher density.

Why choose when you could have both, and when the computer can optimize for you? Hybrid drives combine both platters and chips. This gives large storage as well as speed. The drive then gets to do analysis on which files are used most frequently and how, and choose where to store the data for the most efficiency. For laptops that only have enough room for one drive, this makes sense, but when you have the space for both you’ll get better performance and price by having one of each.

What’s right for ME?

The hard drive requirements for Windows ME are 480-645 MB free space, and it does not specify the type of hard drive. For newer operating systems performance is generally better with solid state drives, but for data storage PMR drives win. We’re seeing larger and larger storage sizes, aided by advances in physics, but at the cost of more and more delicate mechanics, as well as slower access speeds. I’m holding out for holographic crystal circuits you see in sci-fi all the time with the clear acrylic cards. Realistically, though, it seems the best idea is to evaluate your actual data needs and buy the appropriate hardware, instead of just looking at the number of bytes and buying the biggest you can afford, or assuming that SSD>HDD>Tape for every need.

EU promises free Wi-Fi to all