A SpaceX Falcon 9 will Blow Up Very Soon, and That’s OK

They say you can’t make an omelette without breaking a few eggs, and there are few fields where this idiom is better exemplified than rocketry. It’s a forgone conclusion that when you develop a new booster, at least a few test articles are going to be destroyed in the process. In fact, some argue that a program that doesn’t push the hardware to the breaking point is a program that’s not testing aggressively enough.

Which is why, assuming everything goes according to plan, SpaceX will be obliterating one of their Falcon 9 boosters a little after 8:00 AM EST on Saturday morning. The event will be broadcast live via the Internet, and thanks to the roughly 70% propellant load it will be carrying at the moment of its destruction, it should prove to be quite a show.

This might seem like an odd way to spend $62 million, but for SpaceX, it’s worth it to know that the Crew Dragon Launch Abort System (LES) will work under actual flight conditions. The LES has already been successfully tested once, but that was on the ground and from a standstill. It allowed engineers to see how the system would behave should an abort occur while the rocket was still on the pad, but as the loss of the Soyuz MS-10 dramatically demonstrated, astronauts may need to make a timely exit from a rocket that’s already well on the way to space.

In an actual emergency, the crewed spacecraft will very likely be speeding away from a violent explosion and rapidly expanding cloud of shrapnel. The complete destruction of the Falcon 9 that will be carrying the Crew Dragon during Saturday’s test will serve to create the same sort of conditions the spacecraft will need to survive if the LES has any hope of bringing the crew home safely. So even if there was some way to prevent the booster from breaking up during the test, it’s more useful from an engineering standpoint to destroy it.

Of course, that only explains why the Falcon 9 will be destroyed during this test. But exactly how this properly functioning booster will find itself being ripped to pieces high over the Atlantic Ocean in a matter of seconds is an equally interesting question.

It was initially assumed that ground controllers would activate the Flight Termination System (FTS) to destroy the rocket and engage the LES. On the Falcon 9 the termination system uses explosive charges to “unzip” the rocket’s propellant tanks and fuselage, rapidly releasing all of the RP-1 and liquid oxygen. This results in a mid-air conflagration rather than an outright explosion.

All things considered, this is the fastest and safest way to neutralize the Falcon 9, and is intended to be used in a situation where the rocket has veered off course and is heading towards a populated area. The FTS has never been used on an operational Falcon 9, but it was used when the onboard computer of the “F9R Dev1” test vehicle determined that it was heading away from the predefined safe zone.

But for the purposes of this test, such an orderly disintegration of the booster doesn’t really fit many potential abort scenarios. The event most likely to trigger the LES during an actual mission would be an engine failure, explosive or otherwise. So for the purposes of Saturday’s test, ground control will simply command Main Engine Cut Off (MECO) at a little over one minute into the flight. The Crew Dragon’s systems will interpret this loss of thrust as a non-recoverable failure, and automatically begin the abort sequence.

Hitting a Brick Wall at Mach 1.5

The time frame for MECO wasn’t selected arbitrarily, either. At approximately one minute into the flight, the vehicle will experience what’s known in the industry as “Max Q”, the point when aerodynamic structural loads will be at their highest. If performing the abort test during the period in which the airframe will be under maximum stress seems like the most difficult time to do it, that’s because it is. Not only is Max Q arguably the point where a structural failure is most likely to occur, but engaging the LES during this stage of the flight will show NASA and SpaceX engineers how the system will perform in the worst case scenario. 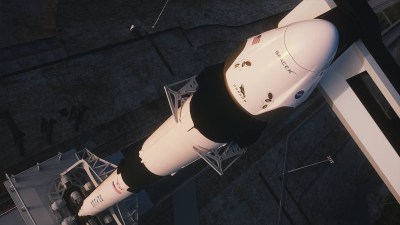 What happens next is really anyone’s guess. Once the Crew Dragon fires its SuperDraco engines and pulls away from the Falcon 9 booster, the flat top of the rocket’s upper stage will be exposed to supersonic airflow it was never designed for. It’s very likely the crushing, instantaneous, pressure will cause the booster to collapse. But even if the booster somehow survives the force of the inrushing air, it will have become aerodynamically unstable; it will quickly deviate from the direction of flight and begin tumbling, which will invariably tear the relatively flimsy fuselage to pieces.

In either event, the rapid disintegration of the Falcon 9 and the resulting release of propellants will provide a perfect analog for the sort of dramatic failure that the LES is designed for.

If everything goes according to plan, the Crew Dragon will pop its parachutes and splash down in the Atlantic approximately 32 kilometers East of Cape Canaveral. Both SpaceX and NASA recovery teams will use this opportunity to rehearse the delicate task of recovering the spacecraft from the ocean. This procedure has also been practiced previously, but never this far out, or with the Crew Dragon returning from such a high altitude.

A successful in-flight abort test is the final milestone on the long road towards human-rating both the Falcon 9 and the Crew Dragon. If NASA is happy with what they see this weekend, SpaceX will be cleared to bring astronauts to the International Space Station as soon as next month, though finalizing the certification process could push the first operational flight to Spring.

After Boeing’s Starliner failed to reach the International Space Station on its first test flight in December, all eyes are now on SpaceX. Should this test go off without a hitch, the Crew Dragon may well become the first American spacecraft to carry astronauts since the 2011 retirement of the Space Shuttle.

The UK Government Vs Apple & Google API on the New COVID-19 App That Tells Who Near You is Infected!